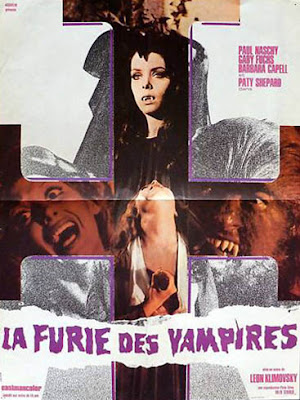 “Things happen that have never been seen by human beings. The blood flows like vintage wine.”

I love a good monster mash, vampires, werewolves, zombies, all fighting over each other’s prey. Sure, Universal invented it, but Europe did it better. There was as much lust for flesh as there was for blood in those films, and Paul Naschy (The Hanging Woman) set the bar. The film Werewolf vs. the Vampire Woman is quintessential Naschy, having all the elements that make his films captivating and enduring. 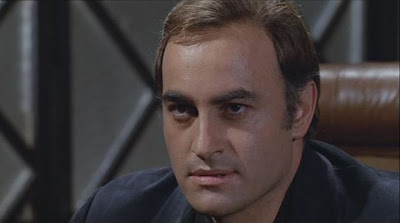 A morgue is where the film opens. Two Doctors are performing a late night autopsy on the body of Waldemar Daninsky, a supposed werewolf who was shot by a silver bullet. According to superstition, if you remove the silver from the body, the werewolf will come back to life. Well they do, and he does, and the blood begins to flow. 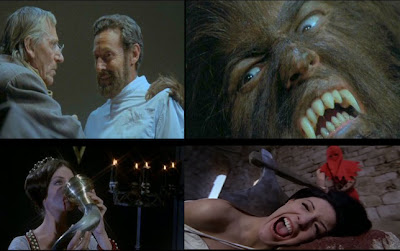 Soon we meet Elvira (Gaby Fuchs), who is having a drink with her boyfriend Inspector Marcel (Andrés Resino). While he discusses wedding plans, she is planning a trip to a small village for a paper she is writing on Satanism and black magic. She believes she has located the tomb of Countess Wandessa d’Arville de Nadasdy, an evil woman who practiced all manner of the black arts. She heads out with her friend Genevieve (Bárbara Capell) but soon get lost and end up far from their destination.  Never fear, Waldemar is here.

Waldemar takes the girls in for the evening promising to help them with their journey, he has been writing a book and has been alone for a long time. Wow that’s a line that only Paul could make work. The women settle in for the evening but the peace and quiet doesn’t hold long. A woman soon barges into the room and attacks Elvira. What the hell? Oh, it’s Waldemar’s crazy sister Elizabeth Daninsky (Yelena Samarina from Murder Mansion) who wants to protect her brother. In the morning  Genevieve wanders around the grounds and  finds an S & M chamber. OK, really it’s Waldemar’s restraints for his wolfing out problem. While she is distracted, she is attacked by Elizabeth who rips her dress open and  then leaves. I know, but its fun. Anyway, in dashes Waldemar who attempts to comfort her. Gen wants to leave but is willing to put up with one more day. Waldemar goes straight to Elizabeth and rips her a new one.

He believes that these girls are his last hope to undo his curse. He needs to be killed by someone who loves him (that he’s sleeping with I guess), so he feels his odds are good with these two hotties. Defeated, Elizabeth agrees to back off. The next day they head to the ruins where the tomb of Wandessa is located, half buried by a tree. As Elvira decides she’s not into desecration so she wanders off as Genevieve and Waldemar open the coffin to find Wandessa’s skeletal remains. Waldemar eyes the silver cross embedded in her but Genevieve removes it, cutting her hand in the process. Her blood flows into the open mouth of Wandessa’s skull. You know what happens next, lesbian vampire madness ensues!

Werewolf vs. the Vampire Woman benefits from great gothic settings, beautiful women and Paul Naschy’s sincere portrayal of Waldemar Daninsky. The vampire action is shown in slow motion which creates a real sense of surrealism as if the world of the vampire is dreamlike. It works surprisingly well. It could use more action but the story moves along well enough to keep you interested. European horror at the time was mainly slow paced, focusing on the mystery and supernatural visuals. I appreciate a good kill, but it’s the haunting and eerie vision of a dark room or hallway that follows you home. 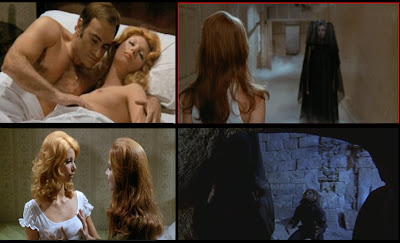 Andrés Resino (Murder Mansion) has little to do in this film as Marcel. He has a charm and assuredness that goes along way but he really wasted here.

Let’s talk about the ladies since they make up the bulk of this cast. Gaby Fuchs as Elvira is a fine lead. She reminds me of Erna Schürer in “Scream of the Demon Lover”, you know, that tight lipped, button downed professional that really is just a dirty freak waiting to get out (hey, it’s just how I see it). She never did a lot of horror but she could have been an interesting leading lady.

Bárbara Capell as Genevieve is beautiful and stylish. She’s sexy and adventurous, so of course she ends up a vampire. This was her only horror film proper but she was a regular in exploitation fair of one form or another.

Finally, Paty Shepard is Countess Wandessa. She had costarred with Naschy in “Assignment Terror” but has no lines here. It’s a shame because she really has presence. 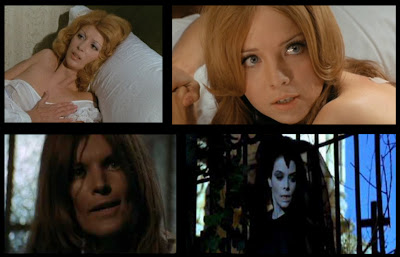 Werewolf vs. the Vampire Woman has its silly points but every film does. It has good performances and Paul Naschy doing what he does, bedding hot women and ripping out throats! Now that’s entertainment!