When I was young there seemed to be a strip club or porn theater on every other block in Los Angeles. It was easy to get lost in the urban jungle so different than it is now. A time when no one was trying to be better, just find momentary happiness. It sounds bleak, but this is how I remember certain aspects of the 1970’s and early 1980’s. It was very much the world I saw when I watched 1983’s American Nightmare.
This gritty slasher starts off with a prostitute (Alexandra Paul) lying in bed naked, smoking some reefer and waiting for her john, who is in the JOHN. He comes out wearing rubber gloves and packing a straight razor. Kinky or psychotic? The girl goes with kinky and ends up dead wrong.

It turns out that the dead girl is a somebody, the daughter of a rich local business man named Hamilton Blake. So when she goes missing, people do notice. Enter her brother Eric (Lawrence S. Day), a Pop Pianist with a grudge against his father. He shows up to her apartment only to find that she is a stripper and a prostitute and has been missing for some time.
Eric teams up with her roommate, the streetwise stripper with integrity Louise (Lora Staley) to find her. Along the way he meets Louise’s friends, a group of strippers and outcasts and also uncovers painful truths about his family. Everybody is looking for this girl including the police led by sinister as always Michael Ironside. I really can’t go more into it because it’s pretty cut and dry. 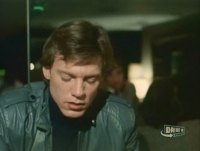 American Nightmare is a dark film. It deals with incest, prostitution, and a section of society that’s painful day to day existence rivals Troma’s 1983 film American Nightmares AKA Combat Shock pound for pound. Every scene is dirty and /or soulless. Every character is sleep walking through a nightmare.

Made in Canada for $200,000, this film is basically an Italian Giallo made by French Canadians about American Sleaze. It represents a time in America that I remember well. A time when the city after dark was a cesspool of sexual activities and every one you saw seemed to be burdened by their own meager existence. This film would capture America so perfectly with nothing but cheap cameras and attitude. It’s as much a commentary on sexual attitudes of that time as much as it’s a sleazy exploitation slasher. What’s really strange is it reminds me of my youth, of simpler times (at least for me). It’s a film that is all but forgotten now, but like the era itself, it deserves a second look.