“YOU SAID THIS WAS GONNA BE A SIMPLE IN AND OUT. SIMPLE JUST SHIT ITSELF!”
Why do we love horror? It’s hard to say, different people love it for different reasons. Most psychologists will say it’s healthy because it releases fears and anxieties that we would otherwise keep locked up. Whatever the reason, whether healthy or not, we continue to watch, though sometimes we are limited in our choices.
However, the more we watch, the harder it is to shock us and the less the film makers even try. Every new film that comes out peaks my hopes for a new experience that will leave me unsettled and I am usually let down. Not to say that the films are bad or predictable, but they follow the standard formula. I didn’t know where I was gonna get my next fix, Eli Roth, Ti West? …Kevin Smith?!?
Red State is writer/Director Kevin Smith’s first foray outside his safety zone. The man who brought us “Clerks”, “Mallrats”, “Chasing Amy” and “Jay and Silent Bob Strike Back” among others does have more rattling around his head and it is brilliant.

Think Jonestown, Waco, Spahn Ranch, this is the type of subject that most name directors don’t touch. This is one of the reasons I am so impressed with this film. Normally, when an established director tries another genre, they pick something safe. Kevin goes all out and channels Tobe Hooper, Eli Roth and even a splash of Quentin Tarantino.
We are introduced to Travis (Michael Angarano of Lords of Dogtown) as he passes a protest outside a dead boy’s funeral that happens to be homosexual. Protesters wave colorful signs like “anal penetration equals eternal damnation”, and yes my friends, that is how we start.

At school Travis and his BFFs, Billy Ray and Jarod, (Nicolas Braun and Kyle Gallner) peruse an online sex personals site. They zero in on a woman who will do all three of them at once, but the catch is that she is in “Coopers Dell”. Coopers Dell is a small community nick-named so after a local Christian fundamentalist named Abin Cooper who is beyond disturbing. The boys, smoking pot and acting foolish, sideswipe a parked sports car on their way to their fuck fest that happens to belong to the local Sheriff. Sheriff Wynan also happens to be getting a blow job from someone that is not only not his wife, but someone that he couldn’t even marry legally in most states. Yes boys and girls, he likes to ring another man’s tonsils. The boys high tail it out of there but not before they identified by the sheriff and his “friend”. 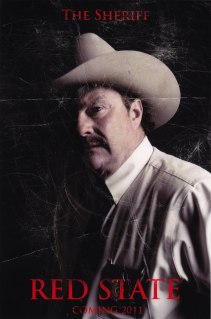 Soon Travis pulls up to a trailer where the woman in question resides. The boys pile out and walk nervously up to the door where they are greeted by a creepy older woman named Sara (Melissa Leo). She invites them in and promptly hands them beer because as she puts it, “I don’t let any man in me unless he’s had at least two beers in him and I’m not drinking alone.” As the boys strip, things go horribly wrong. They pass out from what turns out to be drugs in the beer and the party is over. Jarod awakens in a small cage by a podium as Abin Cooper (Michael Parks) gives a sermon about the evils of homosexuality.

Jarod is alone and we see a man with a sheet over him tied to a giant cross. What follows is one of the most grisly and disturbing murders since “Henry: Portrait of a Serial Killer” and some torture by cattle prod and it’s all in the name of GOD, isn’t that special?

Soon a deputy dispatched by Sheriff Wynan to the area, pulls up and notices Travis’s banged up wagon hidden behind a bush. Abin stops his “cleansing” and goes out to contain the situation. Not everything goes as planned inside or out and all hell breaks loose!
At 4:47 AM, ATF commander Joseph Keenan (John Goodman) is awakened by a phone call. He and his team are dispatched to the scene and as if the film wasn’t bloody enough, it turns into the “Wild Bunch”.

What follows is an extremely violent convergence of law and biblical order, the sheriff, the ATF, and the boys all trying to make it out alive. The violence is shocking and graphic though appropriately so. What is great is that the film keeps you guessing. The deaths are shocking and sometimes come from unexpected places leaving you a tad bit disorientated.
The cast is remarkable for this film with everyone holding their own. John Goodman has definitely been born again hard and this character belongs up on the shelf with his awesome Bones Darley character from “Death Sentence”. Michael Parks knows how to deliver and it’s nice to see him here as the crazed Abin Cooper who is willing to torture and kill in the name of GOD. Oscar winner (!) Melissa Leo as Sara, the bait, is a performance to beat. She is eerie and real as a white trash, god obsessed wife who just wants to serve what she believes. Kerry Bishe as her daughter Cheyenne is a wild card that I’m not sure if I should trust even up till the end and once again her performance rings true.
As the boys, Agarano, Gallner, and Braun are convincing. It’s nice to see teenagers written as teenagers, something John Hughes was very good at and I believe Kevin has a knack for. Equally so for the ATF team lead by John Goodman and Kevin Pollack, they come off a little tired and jaded and importantly, they come off as veterans.

I can sit here and praise this film all day but I know that every word I say builds your expectations higher and higher. I can only ask this; when you watch this film, watch it as a horror film about a god cult and don’t watch it as “Kevin Smith does a horror flick”. You will do it and yourself a great disservice. This Halloween is the first one in nearly a decade where we have multiple horror films slated for release. I hope you get out there and support it as well as all the others coming out. I sure as hell don’t want to go back to the days of “If it’s Halloween, it must be SAW”. I want to have choices and Red State is a worthy choice. As Abin Cooper might say “The right to choose is God given…if you choose right”.