“Could you love me?”
“Yes. If you looked like Thomas.”
Every now and again you come across a film that you love and can’t wait to share with the rest of the world, and when you do, nobody has heard of it. Such a film is Lady Frankenstein.
The film opens with a couple of “Burke and Hare” like grave robbers digging up a body and delivering it to Dr. Frankenstein and his old and crippled assistant, Charles Marshall. With all the pieces in place, the Dr. begins to prepare to reanimate the corpse. Enter the Lady of title; Tania Frankenstein.

Tania has been studying at the University and is returning home after graduation. She is just as ambitious as he is and dabbles in human experimentation herself, and that’s not the only experimenting she’s into. She also enjoys teasing the local simpleton Thomas, if only he was smarter…
Meanwhile the Dr. and his assistant bring their creation to life, and thanks to a fire, he comes out a creepy bugged eyed mongoloid, who kills the Dr. and escapes. Tania vows to make her father immortal by creating an avenger to hunt down the monster and destroy it! Charles confesses his love for her and she begins to hatch a plan involving Charles, the idiot servant Thomas, and her father’s work.

Made in 1972, this film is perverse but subtle. She is arrogant and sexual, without any real sense of consequence, as many rich children are. One murder ordered by Lady Frankenstein is carried out on the victim as she straddles him, coming to orgasm as he convulses in death. Now that’s a scene. The scene of her making love to her creation surrounded by growing flames is unforgettable. 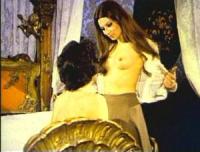 Frankenstein is a theme that has been done so many times that you really don’t care anymore. This film is an exception, like The Bride, it takes the idea and attempts to turn it on its ear, and does so successfully. All the familiar Frankenstein pieces are present including the cry: “It’s alive!”, the angry village lynch mob, and the tossing the girl in the pond (though this time she is a sexy nude woman). It is one of the most adult versions of this tale, but done with respect and class.

If this film falls short in any category, it’s the creatures make up. I’m not gonna lie and say it’s great, or even OK, it sucks ASS, and not in a good way either. Fortunately everyone else is excellent.

Rosalba Neri is perfect as Tania Frankenstein, a young woman that doesn’t know what the word NO means. Rosalba made some good horror films like The Devil’s Wedding Night and The Devil’s Lover and had many admirers. The word is that this film was put together by a producer that was smitten on her. She would have been great in a Hammer film, it’s a shame she never made it to Bray.

Joseph Cotton is fine as Frankenstein, but is given little to do. He does however give the film a sense of class that may have otherwise been overlooked.

Many people overlook this film or dismiss it by the title. It is a solid piece with a few flaws but hey, what film from the period doesn’t have flaws. This is a film well worth tracking down in its entirety. The only complete version was put out by DVD Drive in but I am not sure they are still in business.
This version is the full uncut feature from three different sources. Email me for more info if you like. I would put this film up against any of the other “better” Frankenstein films and it remains one of my favorites. Do yourself a favor and don’t dismiss it based on the title. Every film deserves to be seen before it is judged. 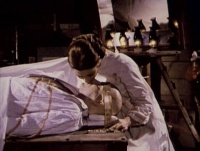 Lady Frankenstein is a film of its period. Gothic, sexy, and willing to take a classic story in a new creative direction. That’s more than we can say today…