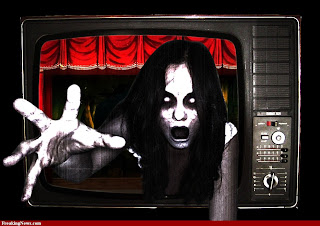 The golden years of horror TV

In the 1970’s and 80’s the local independent station KTLA (now the CW) used to show the old Universal Horror films. For one week, twice a year, the viewer was treated to Frankenstein, The Bride of Frankenstein, Dracula, The Mummy, and The Wolf Man. On the weekends you could find The Creature from the Black Lagoon and some Hammer Horrors (my introduction to just how sexy horror could be) on appropriately enough, channel 13.
The night brought hosted horror from Elvira, Mistress of the Dark. Elvira was sexy with her mouth closed, funny when it was open and half naked all the time. She specialized in low budget, Z-grade films and Euro horror that uncut would play like pornography.
If you were home in the afternoon, maybe sick from school, you could watch The Addams Family and The Munsters.  You also had anthologies like Tales from the Darkside.
Every day of the week there was some kind of horror on TV, serious horror!  Then one day, it disappeared like a Virgin in a Whorehouse! I mean gone!
Enter…Cable TV!
Cable killed a lot of TV markets, but horror was one of the hardest hit. Why watch your favorite films dismembered on TV? I love and respect horror and it’s because I do that I say this: Horror sates to primal urges; the need for sex and the need for violence! That’s what we want to see. Cable gave us 24 hour film options, uncut! Though you could catch the occasional horror film, horror really became the domain of one show; Tales from the Crypt.
Tales from the crypt gave us big name stars, sex and violence. While nowhere near as sexy as Elvira the Crypt Keeper gave us the one thing Elvira couldn’t (well not overtly)…T& A.  The general structure of Tales involved sex at the beginning to get your heart pumping and the violent or horrific climax to well, bring you to climax (metaphorically of course).
TV couldn’t compete with that, so it stopped trying. Sure there were the X-Files and Millennium, and dozens of supernatural themed shows that lasted about as long as your first time, but no vampires, werewolves, witches or demons, until Buffy Summers move to town.
High School as Horror
Buffy the Vampire Slayer created a horrific world in the classic sense. Vampires ruled this world but every kind of creature inhabited it. It created a depth to the Vampiric society only glimpsed at in film. Interestingly enough, most of the horror came from the consequences of Buffy’s actions. Friends often die and Buffy’s own mother is found dead on the couch after a brain aneurism. Fun! Though it had its reputation as group therapy for teens, Buffy mattered.
Horror TV is both nostalgic and derivative today with Vampires the reigning kings of the horror world. By the way, Vampires are now pretty white kids with immortal problems (thanks Twilight)! Network TV and Cable have learned to play nice together. There are Supernatural quest shows (Duh, Supernatural) Vampire Diaries, True Blood, Walking Dead, and they keep coming. What’s funny is that none of these shows have any bite with the exception of The Walking Dead.
Zombies Zombies Zombies
The Walking Dead is an AMC scripted show based on the long running Image comics’ series. Following a group of survivors trying to find a safe place to live after a Zombie apocalypse, it leaves the viewer wanting more each week.  Gory, Emotional, and serious as hell, this is the one to watch.
Horror Hosts in force!
Over the years, horror host seem to disappear. Not quite. With the internet one can watch a weekly show from anywhere in the nation. Just because you don’t have one in your state doesn’t mean you’re doomed. Over the past few years Los Angeles has been lucky enough to have two. Ivonna Cadaver of Macabre Theater and the Queen of horror hosts herself, Elvira. Elvira has been revamped and is back to late night TV. It’s just as fun as it used to be and Elvira has aged like a fine bottle of blood red fine. Sometimes you actually can go home again.


We have had a lot of Horror Channels come and go but the ones that stay usually offer minimal programming choices. Usually reruns of horror themed shows with little actual feature film content or original programming. All this is set to change as Hart D. Fisher is launching American Horrors upon the world. A 24 hour uncut horror network specializing in rare features and original programming. You want Buffy? You go somewhere else!
Is it safe to say that horror is back on TV? It depends on your perspective. I like to think we are making progress. I was at a press conference for The Flash TV show before it aired. The producer got up and made a closing statement that was as true now as it was then. Even if you don’t like it, support it, because if you don’t, it all goes away.  I guess in the end, it’s never gonna be what it was, but at least it’s what it is…